INTERESTED IN PLAYING OR COACHING IN EUROPE? LOGIN or REGISTER NOW FOR FREE!
Posted on 05 Mar 2011 - Go back to news list 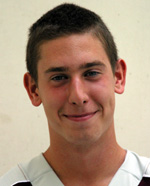 Brian Davilla (5'11'' 169 lbs) was a wide receiver for Oregon State (NCAA Div. I-A). Before joining the Beavers, he played at Cabrillo College (JuCo) where he caught for more than 1,400 yards and scored 13 TDs.

Link to the original article (in french): http://elitefoot.blogspot.com/2011/01/transferts-casque-dor-chevaliers-et.html

Sent by Florian Thiery
Please login to comment.
Go back to news list
Register now!
My Messages
Sent Messages
Who is online? (12)
Who saw my profile?
My Profile
My Account
My Notes
My Contacts
My Block List