INTERESTED IN PLAYING OR COACHING IN EUROPE? LOGIN or REGISTER NOW FOR FREE!
Posted on 25 Nov 2011 - Go back to news list 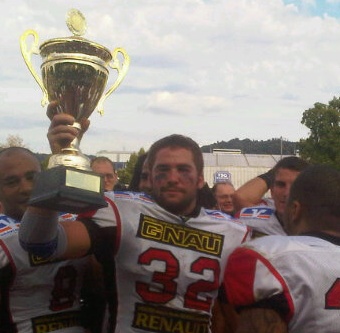 
Joe Sturdivant has signed with German semifinalist, the Marburg Mercenaries as their new head coach. He comes to Marburg after a year’s absence spending the 2011 season as a player/coach for the Catania Elephants of the Italian first division (Italian semifinalists). In 2010 Joe played for Marburg and as the team captain helped the team to an 11-2 record and a berth in the semifinals in the German top division (GFL).

In the 2011 World Championship of American Football Joe starred for Team USA helping the team to the World title.

He first played in Europe for the Cineplexx Blue Devils (team captain) (Austria) and the team finished with an 11-5 record.

He enjoyed an outstanding career at SMU (Southern Methodist University) in Texas (Div. 1, NCAA) and in 2006 was 4th leading tackler in college football (109) while earning 1st team all conference honors at defensive back. In 2005 he was 5th in the country in pass breakups and 12th in tackles.

He served as the safeties’ coach for SMU during the 2007 season.
Please login to comment.
Posted by Meech Eaton 8 years ago
Congratulations! Just when I thought you were ready to put football behind you, you step it up a notch.
Posted by Micah Brown 8 years ago
Congrats to you Joe. Make that place a football factory. Best wishes.... Micah Brown
Go back to news list
Register now!
My Messages
Sent Messages
Who is online? (6)
Who saw my profile?
My Profile
My Account
My Notes
My Contacts
My Block List